Flashback Friday: The Eyes of the Dragon

All Aboard the Fail Train 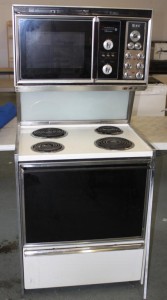 So this enormous, heavy pile 0f crap was our stove and microwave. Even though our place was built in 1991 and has an upgraded kitchen, the kitchen appliances are hideously out of date. And most don’t work.

This stove, for example, is what we nicknamed “The Ghetto Stove.” It earned its nickname because the stove knobs are broken. If you set the stove to 375 degrees, it will actually heat to 125 degrees. And its random enough that if you want to cook, say, food—you get to play “Guess that Temperature!”

We knew when we bought the place that we’d be replacing the major appliances, but we didn’t know how few actually worked. (Thank you, inspector for failing to notice & seller for failing to disclose!)

Two months ago, we began our renovations to our home. This month, we were supposed to be replacing the stove & microwave and installing overhead lighting in the living room and master bedroom. Due to the epic fail of Home Depot, we ended up only doing the first half. Here’s how it went down:

Step 1:   We researched which appliances we wanted.  Upon seeing that ordering the stove & microwave online would give us an additional discount, we ordered them online on Home Depot‘s website. We paid an additional $130 for delivery & installation (and haul away of the old unit).

Step 2: We scheduled our delivery window and waited. (We took off work to be home for delivery.)

Step 3: Delivery folks arrive. They take one look at the old unit and refuse delivery.

“We can’t install the new microwave because you don’t have an outlet for it. Units like that, with a combo, are wired together.”

This actually made sense, irritating though it was.

Step 4: We hired an electrician to come wire a new outlet for the over-the-range microwave. This cost us an additional $200. After this was done, we rescheduled delivery. (Again, we took time off work.)

Step 5: Delivery folks arrive. They pull the old unit away from the wall and measure. Then they tell us that the new units won’t fit. (Note: We measured. They fit.) The delivery folks claimed that the microwave, while 30″ wide, would require 31″ to install. They also claimed the space between our cabinets was 29″ and thus, too small. They suggested we “hire an installation contractor to sand down the sides of the cabinet and install the new microwave.” My question to them was, why did we pay additional $$ for installation if they weren’t going to install? The delivery folks explained that they were 3rd party workers hired by Home Depot and as such, were unable to do anything installation wise beyond “screw it into a wall” or “plug it in.” Anything that required modification, was out of their contract and a liability.  The workers also told us that they were paid “by the install,” so by being unable to install our appliances, they weren’t getting paid. (They’d done six jobs before us that all had problems and were rejected. So far, none of the guys were getting paid for the day at all, which I find criminal!) They refused delivery and took our new stove/microwave with back with them—AGAIN. (Apparently, we couldn’t accept delivery without saying they’d been installed—even if they hadn’t. And since they hadn’t been installed, it would be a liability.)

Step 6: We drove down to our local Home Depot and spoke with the Asst. Manager. At first, she told me that Home Depot wasn’t responsible for problems that popped up once they arrived. They had “no way to know” that my cabinets were too small. I showed her pictures that demonstrated they were not too small. I also asked why I’d paid for installation, if they couldn’t install anything? She said she could refund our installation fee, but that was it. I asked her what we were supposed to do with no appliances and no installation. (Installation of the over-the-range microwave isn’t simple and isn’t a 1 person job.) She said it wasn’t something she could help with. When I mentioned going to Twitter with this, she immediately backtracked and said she could have some 3rd party contractors bid for the work and get back to us.

Step 7: Four contractors bid on the work. One of them was a painter. A painter. As in, he had no experience in general contracting, yet Home Depot felt he would be a great person to help us. ??? Two of the general contractors had abysmal ratings on Yelp and Angie’s List. Ratings from many people saying they overpriced, did sloppy work that fell apart, scammed people, and so on. Luckily the fourth guy had decent reviews, and we called him. Of course, he couldn’t install what we didn’t have, so back we went to Home Depot.

Step 8: This time we spoke to the store manager. He offered to have the delivery folks deliver the stove and microwave to our local Home Depot and then he’d have his employees deliver it to us the same day (for faster delivery during a time we would actually be home). We scheduled this, and then scheduled our general contractor for the next day.

Step 9: Home Depot called. When the stove arrived at the local store, it was dented. It’s on the side and thus, once installed, invisible, but it is damaged none-the-less. It’s cosmetic, but still considered damaged. They offered us a refund for part of the cost because of the damage. Knowing it was only cosmetic, we agreed.

Step 10: Home Depot delivery arrives for the third time. The two employees they sent were in no way, shape, or form delivery people. They reminded me of the general workers at the store. Both were scrawny and not made to move heavy objects. Besides tracking who-knows-what across the floor and not-cleaning up after themselves or using booties or anything else, they banged our new stove down the stairs. They dropped it twice. (Let this be evidence, Internet, in case it stops working later, and I need to use the warranty.) Once downstairs, they left both the microwave and the stove in their crates. They refused to unpack them from their crates. They also refused to remove the old unit. When I explained that I’d paid for that service, they called the store. The store told them to remove it. Then I got to watch these two men try to move a heavy, over-sized stove/microwave combo up the stairs. They broke it by dropping it because they couldn’t carry it (as in pieces went flying). Since it was the old unit, I didn’t care that it was broken, but I was worried about them injuring themselves. In the end, my husband had to help them remove the old unit as he was stronger than both of them. 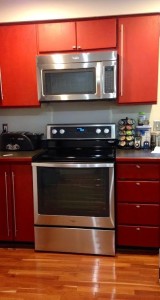 Step 11: When our general contractor (installation guy) arrived, he had a heck of a time unpacking the stove and microwave by himself without damaging our hard wood floors. (Had he known he’d need to do that, he would have brought his helper and tools to do so. As it was, we paid for Home Depot to unpack it and they didn’t.) Upon unpacking the microwave, it too was damaged. The corner was sticking out wrong, and the contractor had to disassemble part of the unit and fix it. Then he installed everything. $350 later, we finally had our new stove and microwave.

Home Depot‘s manager has refunded our delivery/installation fee. They also gave us a $350 refund for the damage done to the microwave and stove. But I still feel like this entire experience was full of fail on Home Depot‘s part.

We still have a fridge, dishwasher, washer, and dryer to replace, not to mention counter tops and flooring to do. And we will NOT be going to Home Depot to have it done either.

Anyone else have Home Depot horror stories to share? Anyone have someone better to use in Seattle?