Flashback Friday: The Lion, the Witch, & the Wardrobe

That Cat is an Asshole

This past weekend was the first weekend I’ve had off in months. I took a vacation if you will to give myself a brain break as well as a physical break (writing is hard on my CTS). My husband and I played quite a bit of Magic: the Gathering at Cafe Mox and spent the entire Saturday watching season 2 of Orphan Black. 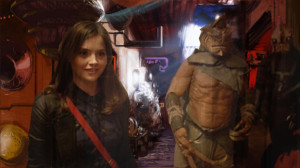 A fun image from Doctor Who of an alien bazaar. Copyright BBC, used under Fair Use.

I need to finish brainstorming/plotting the Amaskan Series’ book 2 and begin writing it. But I also want to edit The Silent Frontier or write more of this weird little novella that came to me this past June (working title is Class-M Exile).

Which do you want to see me work on next? To help you decide, I’m going to leave the first page of this novella here for your enjoyment. (And of course, the excerpt of The Silent Frontier is already on the site. Just click the title The Silent Frontier.) 🙂 Happy reading.

Bay-zar.
Class-M planet in the middle of no-where. Dust, dust, and more dust. Unless you circled ’round to the more habitable region, you’d be stuck without a ship ta anywhere.
‘Round the corner though, you could find everything from ship parts and dried food packs, to roast dog and the rare bi-cycle. Hell, you could even buy yourself a gen-u-ine religion if you were so inclined.
I’m not sure why I came here, only that I’d never been, and everyone says you hafta visit least once. It wasn’t the humidity that left my noses crinklin’ in the bright sun, but the smell of manure and too many beings as hundreds of heads bobbed up and down in a sea of booths, goods, and tourists.
The ultimate tourist trap. And here I’d taken the bait.
Sweat pooled inside my heavy ship boots. Other travelers from the ship bumped ma elbows as they disembarked The Marzapan (don’t ask, the Captain has weird taste in food).
A mass of blonde-almost-white hair floated above the crowd until she stopped just inside my personal-space.
“Ever been to Bay-zar?” she asked.
Every race, religion, creed, gender, species, and nationality in over a hundred worlds traveled through Bay-zar, but never before had I seen her kind. Hell, I didn’t even think they existed no-more.
Whispers moved across the market like rain—first as tiny droplets, mostly ignored until the down pour caught everyone off guard. Then all motion stopped. The chatterin’ and clankin’ of the market died as all focus shifted ta her.
One gentleman tumbled over a child in his attempt ta flee. Some three-eyed creature let loose a half-cough, half-scream as it raced up the ramp of The Marzapan.
“What?” I asked. “She’s just a hu-man.”
“B-but look at her! She’s only got two eyes!” a voice cried out.
“Yeah, and two legs. Who uses two legs anymore?”
The cries continued, but the female human stood there in cargo pants and tee-shirt that read, “A woman without a man is like a fish without a bicycle.”
To them, she was the plague. She was a one-way-trip to the flames of a dying sun.
And she was awesome.
I didn’t know what a fish was, and I’d never seen a real bi-cycle, but by-golly, I was gonna find out.

P.S. I voted randomly to test the poll, so you can ignore my vote. I’m on the fence on this one!