That Cat is an Asshole

Breaking into the Boys’ Club

Pour Some Sugar on Me

My epic fantasy, Amaskan’s Blood, comes out at the end of December. This is both exciting and terrifying. As someone who is mostly an introvert around people I don’t know, the idea of promotion is intimidating. Especially since it’s not a strength of mine. 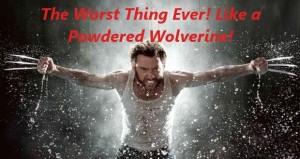 Pour some sugar on Wolverine.
Keep reading. The picture is relevant.

See, what you have to understand is that I have a funtastic amount of panic/anxiety disorders, which makes me one hell of a control freak. It’s not just that I want to be in control, it’s that I have to be in control. The obstacle here is that I feel like I don’t know what I’m doing. (I have knowledge of promotion/marketing, but because I’m not an expert in it, my anxiety makes me feel like I’m clueless, even when I’m not.)

Plopping me into an unknown situation with unknown variables and an unknown outcome, much less on a deadline, makes the pit of my stomach have anxiety issues. No matter how much I make a list and remind myself that I do have a plan and a goal, some days, it isn’t enough. I melt down into a pile of ooze.

This sort of situation is the worst thing you can do to someone with panic/anxiety issues. I was all set to have a panic attack, until my husband said:

I’m pretty sure huffing powdered glass would be worse.

The next line he said got garbled in my panic—something about giving wolverines, but in my panic, I mixed the two and heard:

I’m pretty sure giving powdered wolverines would be worse.

Writer’s are supposed to be a bit crazy, right? And now I can’t get that Def Leppard song out of my head. Dammit. Now it’s in your head, too. You’re welcome.
(Image of Wolverine has been modified but is copyright 20th Century Fox and used under Fair Use.)