I’m calling this my Monday Night Game On! post as I don’t watch football at all and spent some of my weekend playing the new Sims 4 game. When I’m not writing sci-fi/fantasy novels, I game, be it tabletop board games, console games, or PC games. It’s a time-consuming hobby, but worth it. At least most of the time.

While I was chaffing to hop on my Minecraft server and test out the release of 1.8 this weekend, the Sims 4 box called to me. On Saturday, I cleared up about 40+ gig of hard drive space from The Sims 3 and installed The Sims 4. And proceeded to take a step backward.

Don’t get me wrong—I enjoyed parts of the game this weekend, but by and large, the game felt like a mobile port or a beta rather than a fully fleshed out game. I’m used to us losing some functionality when a new Sims game comes out. I mean, how else will EA ever make any money if not to nickel and dime us to death by releasing the same expansions over and over again? And yet, Sims 1-3, I bought every expansion. I was suckered in by the game and enjoyed playing! Until now. 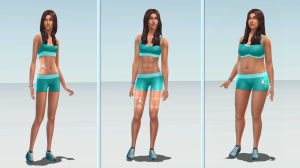 Click image to see a larger view of the sliders.
Image copyright © 2014 sims.wikia.com

The Good:
I love the sliders in Create-A-Sim mode. I love that I can get detailed enough on a sim to actually control the width & muscular definition of someone’s calf. I can grab and drag just about any body part to adjust it, which is freaking long overdue. The house building tools are also a huge improvement. The ability to drag and drop entire rooms or rotate an entire house are also long overdue improvements to the game. The graphics have definitely been beefed up, and I love how smooth the game runs on my machine. Flawless—at least in this regard. Unfortunately, none of this makes up for the rest of the game.

The Bad:
While the sliders are great, Sims 4 took away the Create-A-Style option completely. No more customizing hair or skin colors, changing the make-up or clothing colors, or designing cool clothing by changing the textures and patterns. Nada. Players are stuck with a few default color choices, which is a major step backward in the Sims franchise. While I know that Create-A-Style was buggy and lagged at times, it made sim creation interesting & unique. It allowed for customization. 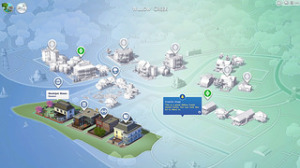 Yes, that’s the entire world map. 3/4 of it is houses and there are FOUR community lots.

The Ugly:
To quote The Pretenders, “my city was gone.” No more can your sim go jogging to a specific location or just roam a city that you built. Your sim can walk around inside their lot and sometimes a bit further, but to get anywhere, your sim now disappears down a rabbit hole. Even if the location is next door. We don’t see them drive; we don’t get a feel that they are traveling at all. There are no cars. This takes away some of the best parts of having a neighborhood in the game. Even worse, when your sim is at work, you can’t do other things (if your sim lives alone) because your sim is off the home lot. You can’t check their hunger or even their job performance. Also, no more going to the bookstore or the grocery store. Most of the community lots are gone. (Sort of reminds me of the loss of independent bookstores these days.)  You can’t modify the four community lots. Story progression is also gone. Neighborhood sims will no longer have kids or do other living things without you doing it for them. The list of missing features goes on and on. :/

So much of the functionality that made the Sims a great game has been stripped away. Honestly, the game reminds me of the previous Sims games released on tablet/mobile devices: stripped of what made it fun until you have the barest basic game. Either that, or it reminds me of a beta release. I feel like I should have played Minecraft instead. It had more functionality in beta than this game does in its pinky.

I think my days of buying EA games are finally over. Especially with a $70 price tag. Ah well, more time writing I suppose! Or I can go finish that Professor Layton game already.

There’s a great list of 89 features completely removed or reduced in this game here. You should check it out if you’re curious. Also, Kotaku has an article with quite a few hilarious videos about the horrors of babies.