Probably one of my favorite tabletop games is the Munchkin series by Steve Jackson Games. There are dozens of themes to this game—everything from vampires and Cthulhu to Pathfinder and space. We own about 2/3 of the games & expansions and store them in a nice wooden case (which I need to decorate with Munchkiny things). 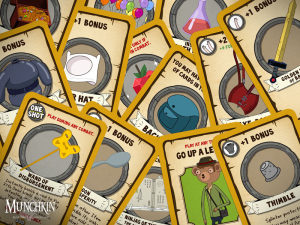 We recently got to try the Adventure Time expansion at PAX Prime, which was quite the adventure (pun intended).

One of the obvious changes with this expansion is the push for the cards to be more visual. Instead of a card saying it’s a two-handed item in the bottom left corner via text, there’s a picture of two arms/hands in the top right corner.

The reps from Steve Jackson Games at the con said it was intentional to help kids get into the game (though if you know anything about how Munchkin is played (cutthroat) or some of the jokes in the game, it’s not exactly the most kid-friendly game. Not to mention that Adventure Time itself feels more for adults than kids). Considering that the location of this notification (two-handed item) changed, shifting from the bottom left corner to the top left corner, it was jarring to me. I kept looking for it in the wrong place.

They also added in character cards that give boons, which is a nice addition. It’s similar to how the Penny Arcade deck building game has starting character cards.

The pictures in this set are humorous, as would be expected from an Adventure Time theme, and the game plays as well as any other Munchkin game. I’m just not sure about the visual format. I’m hoping it’s a change for only this set.