This month, one of the books I’ve read was Kindred by Octavia E. Butler. 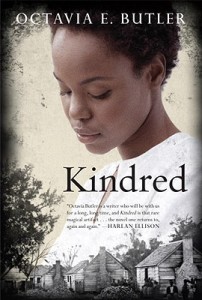 I’d heard about this book but had never managed to sit down and actually read it until this month. While it deals with time-travel, it does so in a similar sense to a book like The Time Traveler’s Wife, which is to say it comes down on the soft side of science fiction.

Not that that’s a bad thing. I loved The Time Traveler’s Wife and greatly enjoyed Kindred. The characters were so believable and well-written that I didn’t care that the science was soft. It was all about the story and the people in it, rather than its ability to be possible.

However, I didn’t like the ending. The way things were resolved felt a bit forced and hacked to me, though I still enjoyed the book. It just felt like Ms. Butler dropped the ball on figuring out a decent ending, which is often the case in time-travel stories. What she did not drop the ball on was her detailed look at slavery.