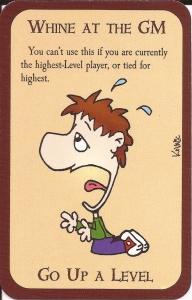 One of my favorite cards.

That glorious game. The ultimate PvP (player vs. player) game that encourages bad behavior and foul language. What’s not to love?

This week’s Monday Night Gaming is on All Things Munchkin. My husband and I are huge fans of this game series. In fact, we have a wooden briefcase that holds all of our collection. I’ll have to post pictures later when I’ve actually painted the damn thing.

Our collection currently consists of:

I think we may have another set or two that I’m forgetting. (Working through a sinus headache so bear with me). Suffice it to say we have LOTS of Munchkin.

Some people don’t like Munchkin merely because it is created by Steve Jackson. I honestly don’t get the hate towards him–it’s akin to people’s hatred of Amazon. *shrug* Munchkin is an enjoyable RPG-like card game.

The entire purpose of Munchkin is to be the first to get to level 10 (or level 20 following Epic Rules). A player can get to level ten by defeating monsters to gain levels and level-up cards. Players defeat monsters by getting loot, which adds to their level count or helps them run away or countless other things. They can also defeat monsters with a little help from their friends. Or enemies.

Players can also stop other people from leveling-up by cursing them, piling up a whole room of monsters they can’t defeat (which usually results in their death), or refusing to help them in combat. People pair up against other players or intentionally try and hurt as many people as possible. As such, the game can get quite cutthroat.

With all this Munchkin-y goodness, our favorites so far have been The Good, the Bad, & the Munchkin coupled with Star Munchkin. Put those two together and you get a shiny Firefly themed game. 😉

We intend to use some of the blank cards they sell to add Kaylee’s dress (+3 for females, +4 if a male in tight pants is wielding it, especially if they are Captains!). Probably will add in Vera and Serenity as a steed / ship.

Munchkin Apocalypse is pretty fun as well with the 7 seals. Adds a new element to the game.

Munchkin Pathfinder is my husband’s favorite (probably because he plays lots of Pathfinder). Anyone who’s played any sort of D&D, Pathfinder, etc. will enjoy this variant since it pokes quite a bit of fun at role-playing games in general.