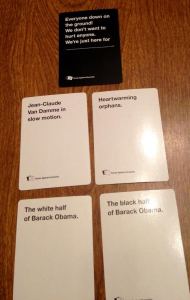 We had 5 players & 2 managed to submit similar cards. What are the odds? (Click image to view larger)

We gathered around an enormous oak table at a friend’s house to play this…just in time for the holidays. We’ve played it before, but don’t get to play it often enough as it doesn’t work as a two player game. In fact, I’d argue that the more players, the better, and the higher the hilarity.

If you’ve never played Cards Against Humanity, you should…provided you have a sense of humor and an open mind.

If you’ve never heard of CAH, it’s a game of hilarity that allows you to really get to know someone. This means you should NOT play this game with those easily offended, especially if they are family.

General Mechanics: The card game consists of black & white cards. Players begin with 10 white cards at the beginning of each round while they take turns being judge. The judge draws a black card (consisting of fill-in-the-blanks) and reads it aloud. The other players then pick white cards to fill in those blanks. The judge reads each option aloud and chooses a winner, which is given the black question card to represent an “Awesome Point.”

While most blank cards have one blank, some have two blanks, requiring players to provide two white cards. If a player thinks they have two cards that would perfectly match one blank, they can pay an “Awesome Point” to submit both. If they win the round, they get the point back.

How to Win/Lose: The only way to lose this game is to lack a sense of humor. You win by getting the most “Awesome Points.”

What I Liked: The hilarity. We laughed to the point of crying many times. We’ve also known folks to almost pee their pants from laughing so hard. It’s a very funny game with 5 main expansions and lots of smaller expansions.

What I Didn’t Like: Nothing. This game is awesome.

Overall Rating/Impression: 10/10. I absolutely love this game. It is probably not a game for kids, unless you want to explain words like clitoris. Not every card is vulgar and offensive, but as black humor can be some of the funniest, many of the cards can be quite offensive in nature. Lots of sexual & drug references, political commentary, and references to horrific historical events.

If you’ve got an open mind and an active sense of humor, game on!