When Words Fail a Writer 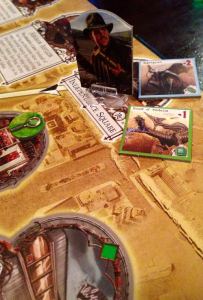 My husband’s character, Monterey Jack, is about to die.

For my birthday, my husband got me Arkham Horror, which not only comes highly recommended in the land of tabletop gaming, but he knew I’d love it because it’s based on H. P. Lovecraft‘s Cthulhu Mythos.

Keep in mind, this review is based off my first play through. I suspect that my rating and thoughts will change as I play it more and with more players.

*The game says 1-8 players, but I would absolutely not play this with fewer than 4. More on that in the review.

General Mechanics: This game is very, very involved. Reading the instructions, setting up the board, and getting to round one took us 2 hours (I am not kidding!). Arkham Horror is a cooperative adventure, meaning that players (in their role of investigators) work together to kill creatures and keep them from overrunning the town of Arkham. Each Investigator begins with certain items, skills, spells, and weapons. They can gain more through the course of the game, as well as allies. Players move around the board (aka the streets of Arkham) in a mad rush to try and close opened portals before they spawn too many monsters. If too many portals open, the Ancient One awakens, which could be anything from Cthulhu himself to R’lyeh or some other beast from the Cthulhu Mythos.

Each investigator has a sheet detailing how much sanity (brain tokens) and health (heart tokens) the player has. Not only can creatures kill you, but you can die of insanity. The goal is to either close all the open gates, seal 6 gates permanently, or defeat the Ancient One.

How far you move across the board depends on your speed. Being speedy means being less sneaky. You also have fighting / will skills and luck / lore skills. There are skill checks to pass before battling creatures, closing gates, or basically doing anything important. Each location you visit, be it in Arkham or in the Other World, allows you to meet up with creatures, buy skills/items, or otherwise interact with events.

Because players must cooperate and divide the tasks, the fewer players you have, the more difficult the game is. We didn’t know this going in and thus, we played with two investigators. It was impossible to close the gates because a new one opened every turn. If there are only two of you, and it takes 4 rounds or more to close a gate, you can’t keep up. 4 players is the magic number in this game–something to keep in mind. The next time we play, if there are only two of us, we’ll play two investigators each to keep up.

The game takes about 3-6 hours to play, so it does run long. Unless your group dies/loses, and then it’s over quickly. Also, the board itself takes a lot of space. Much more than Firefly does!

How to Win/Lose: Players win by defeating the Ancient One in the final battle. Players lose by having everyone die.

What I Liked: I loved the mood of this game–the H.P. Lovecraft feel of it. I loved the art and style to the board game as well. The goofy investigator names like Monterey Jack made me laugh!

What I Didn’t Like: The instructions were way too verbose. Many times, they were repetitious to the point of a headache. The game play instructions could have fit in half the number of pages. Also, I didn’t like the fact that two player was so difficult–to the point of almost impossible. There was no way to make money, yet the only way to solve our particular story line (based on the cards) was to have lots of spells, which all cost money.

Overall Rating/Impression: On a first play, with 2 players, I’m giving it a 6/10. I have a feeling that when we play it again with more people, this rating will change, but I’m scoring it based on initial impressions.

I can’t wait to play it again with more people–I love the theme to this game!