Unsuitable Job for a Woman (Review)

And Then There Were None (Review)

I will admit to one fact– 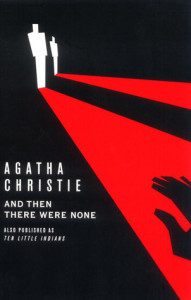 And Then There Were None by Agatha Christie is the first Christie book I’ve read. I’m firmly a SF/F reader, but I do enjoy a good mystery–typically thriller or forensic mysteries like those by Sue Grafton or Patricia Cornwell.

And Then There Were None was not my cup of tea. I’ve been told that I should try a different work by her, such as Murder on the Orient Express, but the rampant sexism and prejudice drove me bonkers. (I realize it was acceptable at the time, but it makes for a hard read.)

I enjoyed the paranoia of the characters. Reminded me of The Monsters are Due on Maple Street (Twilight Zone episode by Rod Serling). I also enjoyed the closed-room idea (or island in this instance). Despite the elements I enjoyed, I struggled to wade my way through the “women in their place” rhetoric and the LGBTQ slurs.

I will give Agatha another try, but this particular book isn’t one I’ll visit again.