And Then There Were None (Review)

Unsuitable Job for a Woman (Review)

As I stated in my review of And Then There Were None, I’ve been on a bit of a mystery kick of late. 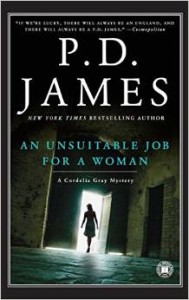 I recently read P. D. James’ An Unsuitable Job for a Woman, which was written in the 70’s. The main character works for a PI, who kills himself in the first chapter. He leaves her with the PI business, and Cordelia heads into her first case.

Along the way, people tell and/or imply that women can’t be private investigators. Despite this, she continues to put herself in dangerous scenarios to prove them wrong and solve the case.

While the character is strong-willed and decent, the plot line bugged me. Without spoiling the book, the person who committed the crime wouldn’t do what they did because it would give away that they committed the crime. I felt like the premise was weak in that regard.

It wasn’t that the character made a mistake (which most criminals do) as much as he/she went out of their way to say, “Look at me! I did it!”

The book was a decent, fun read for a classic, and I enjoyed it until I reached the ending with the aforementioned plot snag.