The wonderful folks at the Seattle Comedy Group’s ComedySportz Improv group had me as the guest of their After Party Podcast late, late Saturday evening (as in 11 PM late). 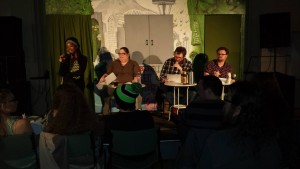 We played a version of the old Match Game with two members of the audience, several members of the improv group, and me, followed by an after party interview with me.

The whole thing wrapped up around 1:30 AM and was loads of fun.

Fair warning that this podcast is not PG rated at all. There is a lot of swearing and adult content at times (mostly during the Match Game). One member of the audience in particular was quite drunk, so just a head’s up. Also, the volume peaks quite a bit. 😉

To give it a listen, head on over to: