H is for Hayao Miyazaki

In today’s continuation of the A-Z Challenge, I give you:

H is for Hayao Miyazaki

The very first anime (or Japanese animation) film I saw was  Kiki’s Delivery Service by Hayao Miyazaki and Studio Ghibli. In it, a thirteen-year-old (Kiki) leaves home to train as a witch. She takes her black kitty, Jiji, with her. She spends most of the movie delivering goods by broomstick while figuring out her powers. Like anyone finding their way in the world, she has a crisis of magic and has to regain confidence in herself and her magic to become a witch once again. 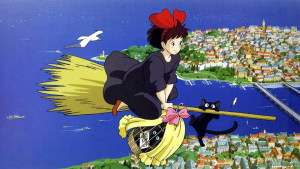 While trope heavy, the animation was so beautiful and the story so rich, that I fell in love with it and vowed to watch more from this amazing artist.

If you’ve never heard of him, Hayao Miyazaki is a legendary animator from Japan and co-founder of Studio Ghibli. He (and Studio Ghibli) are responsible for films such as Princess Mononoke, My Neighbor Totoro, Spirited Away, Howl’s Moving Castle (an animated adaptation of the novel by Diana Wynne Jones), Nausicaä of the Valley of the Wind, and so many others.

Hayao’s focus on characters before anything else taught me the importance of doing this in my own works. One reader (via Amazon review) said that in my fantasy novel, Amaskan’s Blood, “ …characters are the center piece of the story. There is a world here, with history and intrigue, but it’s not displayed to you in the dog and pony show. It is the backdrop of the play, it doesn’t get in the way of the story, but it is well crafted and pleasing to look at in its own right.”

If you create characters worth caring about, most of the time everything else will fall into line as it should. Shortly after Kiki, I watched My Neighbor Totoro and fell in love with the Cat Bus, Soot Sprites, and Totoro himself.

From there, I set out to own everything Miyazaki animated, whether it was dubbed in English or subtitled. The characters made me giggle, bawl my eyes out, and rage against the death of our planet. Because of an animator and artist with a passion for in-depth characters, I’ve gone on grand adventures with them all.

This post is part of the A-Z Challenge. Every day (except Sundays) in the month of May, I’ll be posting about people, places, books, games, and other things that influence me as a writer or add a certain magic to my life. Join me in April as we explore a Hodge-Podge of Influences & Wayward Treks through the Fantastical.