Normally I review tabletop games, but I enjoy console games as well. I’ll be covering two handheld games this week and next because these two games are screaming for a thorough review.

In Q1 of 2015, Nintendo released two freemium games for the 3DS: Pokemon Shuffle (February) and Pokemon Rumble World #4 (April). I’m not a fan of freemium. I’d rather pay $30 for a game and own it–all of it–rather than play a game that requires me to continually spend money to play. That being said, I’m a huge fan of the Pokemon games and decided to try them both with the promise that I wouldn’t spend money on either one.

[important]I’ve found Pokemon Rumble World to be a far superior game to Shuffle, and I’ll cover it next week and give a thorough comparison of the two.[/important] 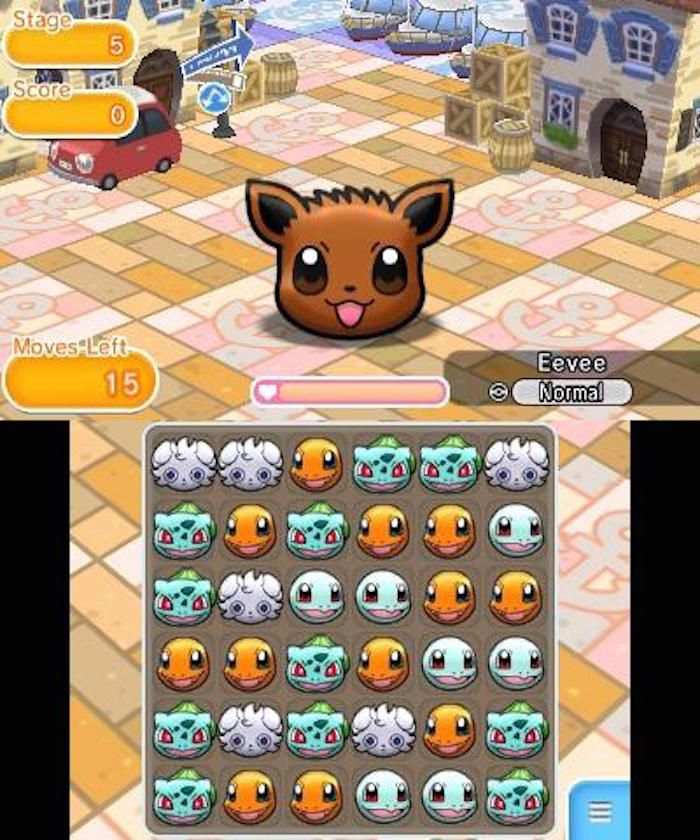 Pokemon Shuffle is a mix of Puzzle & Dragons or Bejeweled and the standard Pokemon game series. In it, you travel from location to location (albeit very generic locations often sharing the same backgrounds) battling and rarely catching Pokemon.

Battles happen via the match symbols (in this case, Pokemon) the way one would in Puzzle & Dragons or Bejeweled. Matching more symbols does more damage to the Pokemon. The catch in this game is that you must beat the Pokemon in a limited number of moves. This could be anything from 3 moves to 20, depending on whatever the programmers felt like. I honestly can’t see any rhyme or reason to it. Also, the luck of how Pokemon cascade, influences your ability to beat them very heavily. As in, I’ve had games that I’ve won on round one because I cascaded with a 68+ combo that I had nothing to do with.

Of course, being “freemium,” you can buy additional moves to help by using coins, which are purchased for real money. (You do get a set amount of free coins per day by logging in, but the amount is quite small.)  These coins can give you extra turns, extra powerful blows, or extra experience.

The reason I said “rarely catching Pokemon” is because the game is set up with a strange mechanic behind it. Pokemon that could be considered rare (e.g, anything above a base, non-evolved Pokemon or anything the game determines a “highly needed type” such as steel or fairy) are hard to catch–often impossible to catch–without spending real money. Case in point, Chansey might have a 5% catch rate. But if I buy enough coins for several Master Balls, I could bump that to a whopping 60%. In other words, I could spend money and still not catch the damn Chansey.

Experience is difficult to acquire…by design, so your Pokemon stay low level without heavy grinding. Grinding doesn’t come cheap either as you’re limited in how long you can play by the number of hearts you possess (similar to what Puzzle & Dragons does with stamina or Candy Crush). You get five hearts, which means five plays. After that, you have to purchase more or wait hours for it to renew.

One mechanic I do like is the online challenges they have every week, which range from battling Meowth for coins or competing with players across the world for the highest score. Of course, if you aren’t pumping money into this game, you’ll do abysmally poor compared to the suckers spending.

I know “freemium” is the new business model game designers have jumped on, but it sucks. You honestly would make more money selling a game for set price because folks like me that hate freemium, would actually buy and play it instead of writing bad reviews of it.

Overall Impression: Skip it. Or wait for Nintendo to come to their senses and allow folks to pay for a freemium-free game.

(Image from game is Copyright The Pokemon Company and used under Fair Use in order to review/criticize and educate.)