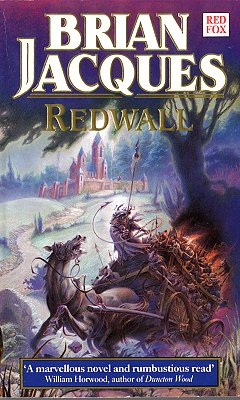 Ah Redwall. Lots of furry little critters running around the Abbey and Mossflower woods. Redwall was not the first book I’d read from the point of view of animals (Watership Down, anyone?), but it was definitely one of my favorites as a younger reader.

The idea that a young mouse could lead the same sort of adventures as a human excited me. I’ve always been one of those people that identifies more with animals than humans–mostly because humans are greedy, selfish, and callous.

One of my favorite sayings growing up was: Humans aren’t the only species on Earth. We just act like it.

It’s true. While I’m quite willing to admit that cows don’t do well for the environment (methane gas yada yada), humans do far more damage. Our over-breeding of cows has done quite a bit as well. In school, I hated biology. I didn’t give two shits about how the human body worked. But you put me in pre-vet equine and animal science classes and suddenly you had me. I was hooked. I memorized every bone and major muscle in a horse overnight because I cared that much.

I was the child who grieved if I accidentally killed a butterfly. I grew up to be the adult who cries if I hit a bird or squirrel with my car. My three cats are almost as important to me as my husband, and while they’ll hate me for saying this, my cats are more important to me than many family members. They are a part of my family and a part of me.

So it’s not a surprise that I can closely identify with non-human characters. I already do so every day.

Stories like Redwall carried me away into a fantastical world and allowed me to think about what animals might say if they could speak to us in English. Science already knows that animals communicate, but we don’t know their language. Imagine if while you’re at work, you cat is having adventures similar to those in Redwall. (Though I hope your kitty is safely an indoor kitty, so maybe those adventures are in the kitchen?) I always liked to imagine Frodo and the rest of the characters in Lord of the Rings as mice or cats. It makes for an interesting story.

While I lost interest about five books into the Redwall series, the books I read stayed with me and gave me some great ideas for stories–a few of which I plan to write.

Because why not? Everyone needs an animal adventure in their life!