Recently, Wizards of the Coast released the next expansion in its ever-running Magic: the Gathering game entitled Eldritch Moon. Due to my convention/events schedule, we didn’t get the opportunity to participate in a pre-release draft tournament, but we did buy a box and do our own mini-draft post-release. 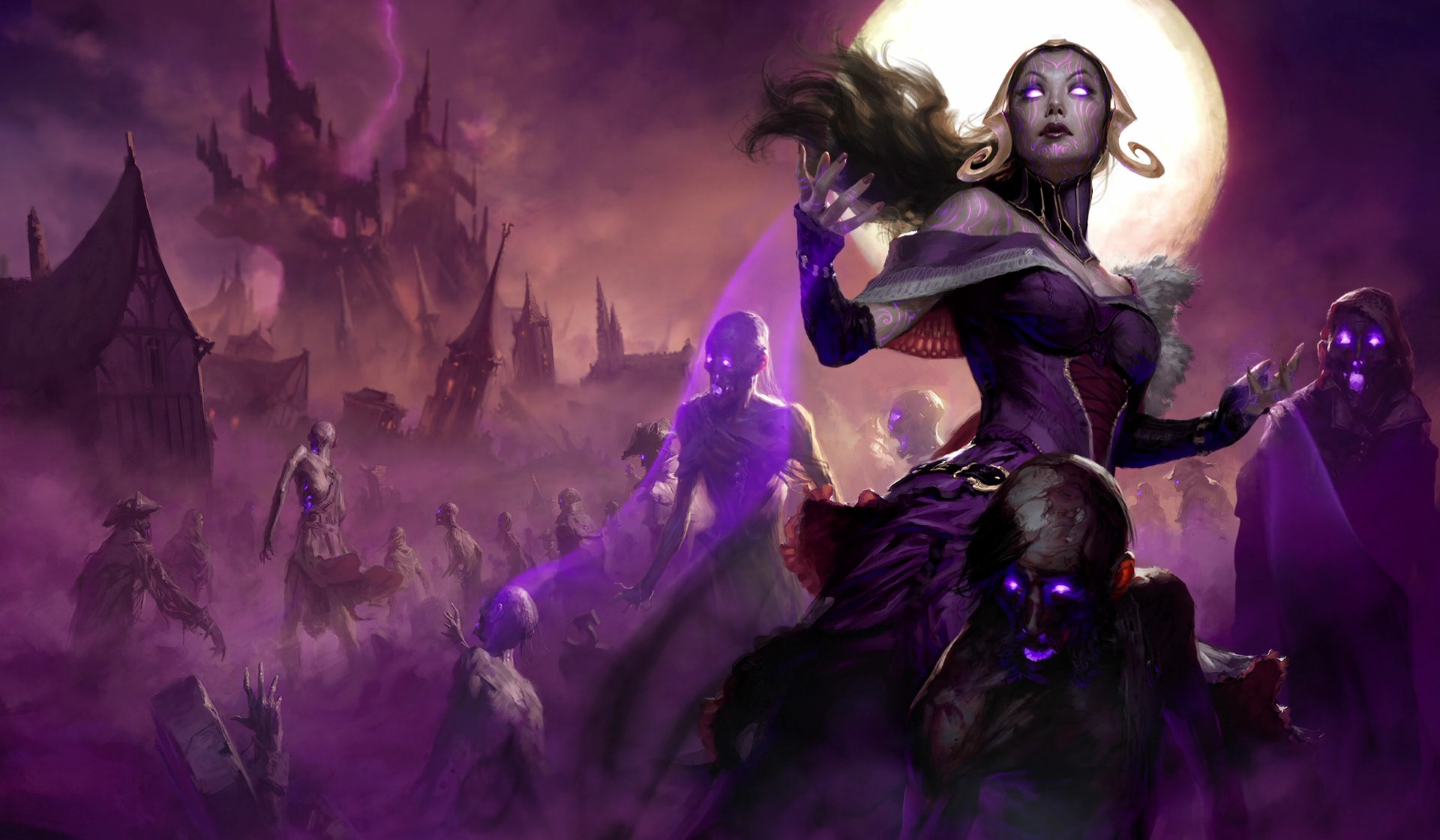 These 205 cards make up set 2 of 2 of the Shadows over Innistrad block. While mechanics such as Escalate and Delirium continue in this set, the new mechanic that fascinates me is the Meld mechanic.

Similar to how a creature can transform, or flip over to be another creature, the meld mechanic allows two creatures to join together or meld into a new creature–usually one much more powerful than the two you had. Below is an example of one of the weaker melds: 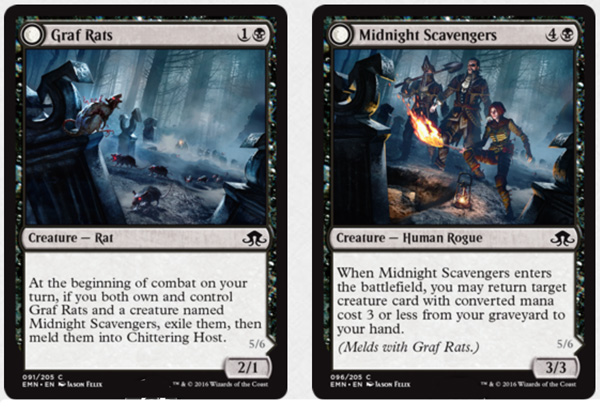 These two cards flip over to form this:

So at first, we were a bit underwhelmed by 90% of our cards we’d opened, including the meld I showed above. Then we opened these: 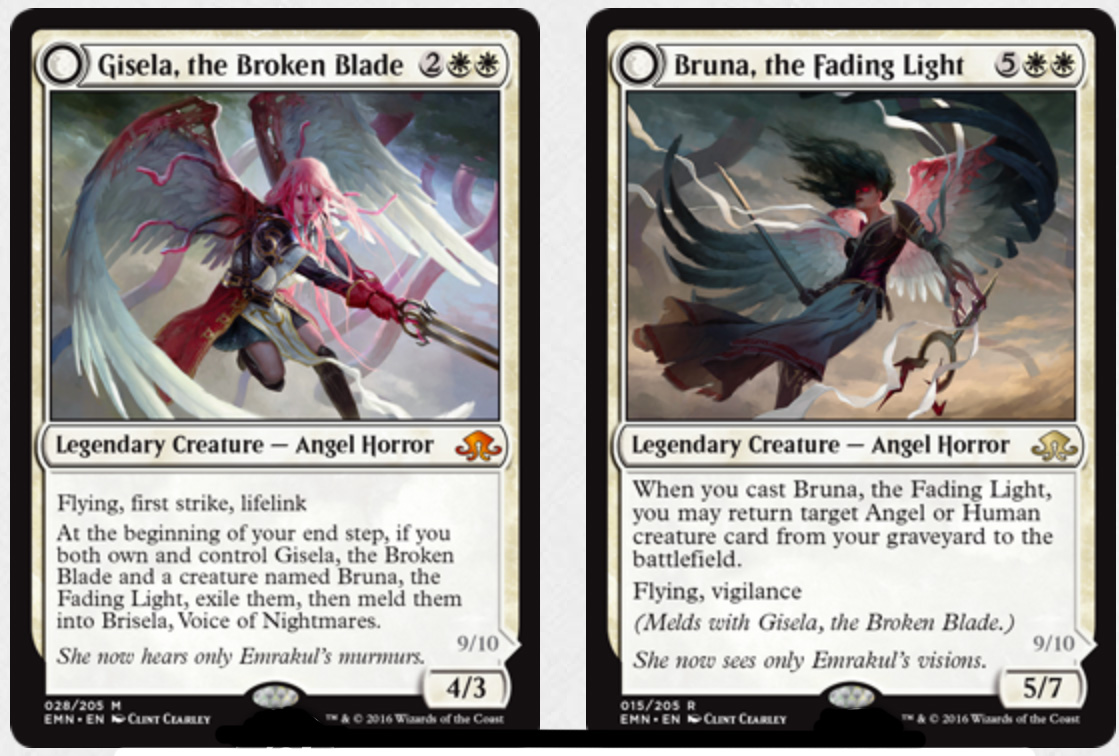 We opened up Gisela as a foil about midway through out box. At the time of opening, she was selling for $65+. Even without the meld, a 4 cost legendary creature with flying, first strike, and lifelike is pretty damn badass. Toss in that she can meld with Bruna and wow.

At first glance, I felt that Bruna, the Fading Light didn’t hold up too well on her own. I felt like she cost too much to bring her out, but after playing with the white cards in this expansion, she’s pretty bad ass as well. She’s a flying 5/7 with vigilance, and when she comes out, you can toss any human or angel from the graveyard straight to the battlefield. 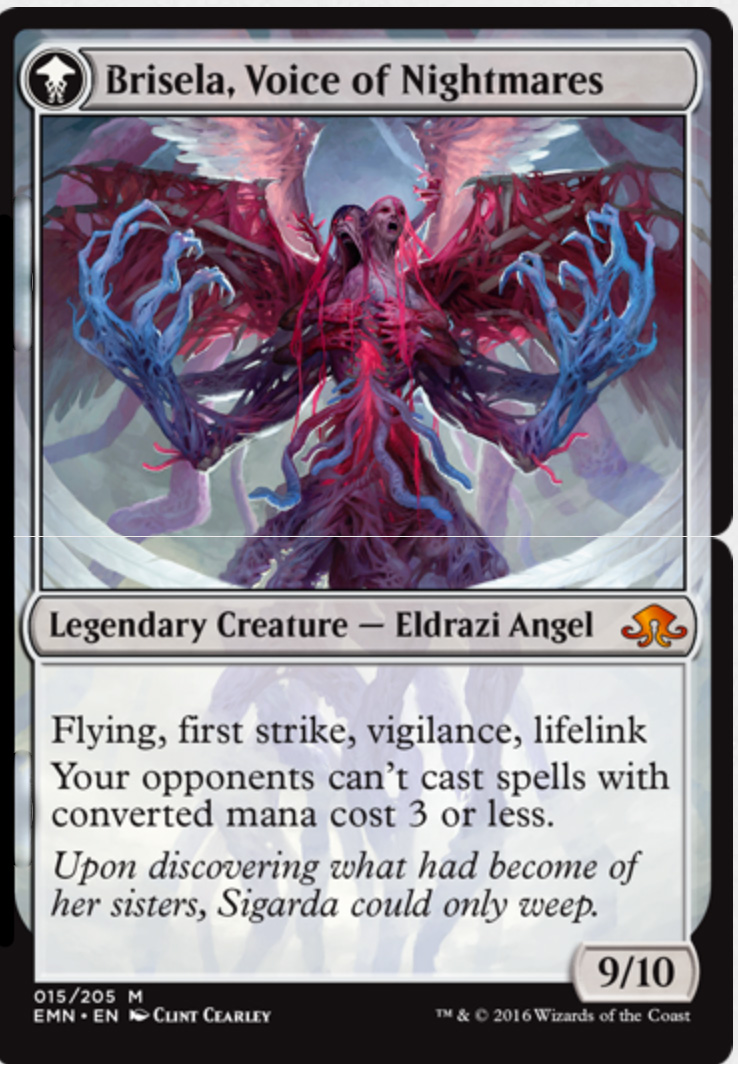 Assuming you get the mana to cast Gisela and Bruna, and assuming your opponent doesn’t destroy or otherwise remove one or both before your end step, Brisela, Voice of Nightmares is a game-ender.

My EDH “Crazy Cat Lady” deck, with Captain Sisay as my commander, lets me find and grab legendary creatures or cards from my deck. Because she’s my commander, I can keep playing her over and over, even if she’s killed. Toss in both Gisela and Bruna and mwahahahahahaaha!

We spent this past weekend testing out the changes, which would have worked great if I hadn’t had both the best and worst luck of the game.

First round, I spent the entire game mana-screwed with 3 mana (only 1 of it was white). I need 2 white mana to cast just about anything in my deck.

Second round, my deck rolled as a speed deck and I won on turn 5? 6? It was fast. So fast that I didn’t get to pull Gisela or Bruna.

Third round, Erik took permanent control of my commander, so I couldn’t go legendary searching. I was at the whim of the random card. To make matters worse, he took control of every card I played because he pulled his win-condition cards in his opening hand. I was also mana-screwed again. (I will add that this deck has serious mana ramping (hence the speed round) and plenty of mana, so being screwed like this was just bad luck.) I’m curious to see this coming weekend how it plays once Gisela and Bruna come out to play.

Overall Rating/Impression: 7/10. Other than the meld feature, there are a few really strong rare/mythic rare cards but for the most part, the set felt like more of the same. It didn’t have half as the umph as the Theros Block or even Khans of Tarkir block.

(All images are Copyright Wizards of the Coast and used under fair use for review purposes.)