What It Means to be Fandom

I’ve been busy enough that tabletop hasn’t been happening much at all (though Magic has), so I’m going to do a bit of a change in review this week by looking at the Commander or EDH format in Magic the Gathering. 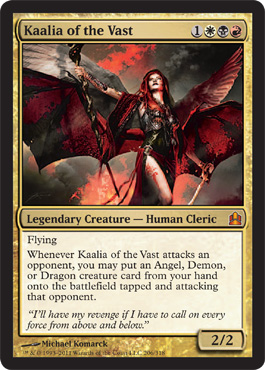 Publisher: Wizards of the Coast

# of Players: 2-6 players (though you can play with more)

Unlike the standard deck in Magic the Gathering, the Commander (or EDH as it used to be called) format is based on a deck-size of 100 cards, 1 of which is your commander. No two cards can be the same, making for an interesting deck with interesting complications.  For example, it’s much harder to get a card that you need when you need it if you have 99 cards to swim through to find it.

Wizards states: “The Commander format is all about picking your hero and building a deck around them. In this casual, multiplayer format, you choose a legendary creature to serve as your commander and build the rest of your deck around their color identity.”

YOUR DECK:  1 commander card (legendary creature) and 99 other cards (only one copy of any card, except basic lands). All cards must be in the color identity of the commander.

COMMAND ZONE: If your commander would be put into your library, hand, graveyard or exile from anywhere, you may return it to your command zone instead. The cost to recast your commander from the command zone grows each time the commander has to be recast. For example, the to recast Kaalia of the Vast a second time, it will cost 1 white, 1 black, 1 red, and three colorless mana. To recast her a 3rd time, it will cost 1 white, 1 black, 1 red, and five colorless, and so on.

COMMANDER DAMAGE: Any player that’s been dealt 21 or more combat damage by the same commander over a game loses the game. “The commander is tracked across zone changes for this purpose (for example, if one player takes control of another player’s commander, any damage that commander already dealt is still counted).”

OTHER FORMAT RULES: While Wizards recommends 2-6 players, I’ve played Commander games with as many as 10 players. It gets a bit chaotic doing that, but it can be fun. Also, all players begin with 40 life (vs. standard’s 20). Wizards has a more in-depth look at the format HERE, as well as a list of certain cards that are banned in the format.

GAME PLAY: I LOVE this format. I love that it is intended to be a casual, non-competitive format, which makes it easier for beginners and non-wealthy players to play the game. It’s a format where you don’t have to spend a year’s salary building a deck to “win.” The creativity required to come up with 100 cards that synergize with each other and yet, are unique, is incredible. Players may find themselves teaming up with others to take on a threat, then turning on each other, much like Munchkin. This is definitely my favorite format to play in…except when douchebags happen.

One of my biggest complaints about even attempting to play Magic in the legacy, vintage, or even modern is that typically, the player with the most money wins. Whoever can afford to go buy all the mythic rares, Planeswalkers, etc., typically ends up with the broken deck that’s near impossible to beat. I don’t think that’s particularly fair to new players or those of us without a silver spoon in our mouth. I don’t know about you but I can’t afford to spend $350 on one card. That’s my freaking car payment. :/

While Commander does allow a player to build a deck from any set (and thus, does open up to the more $$ = better deck issue), the format itself is meant to be a CASUAL format. A player doesn’t need a $350 card for their deck because the format isn’t meant to be all that competitive. I love this because I can build very thematic decks. For example, I have a seriously casual deck that is cat themed with a crazy-cat lady commander. I have a much less casual deck (more on that later) that is dragon-themed, and then I have a more intermediate casual deck that is Hydra-themed (both hydra as is in the creature and HYDRA as in Hail Hydra! And yes, I do plan on making an Agents of S.H.I.E.L.D. deck to go with that).

Probably 60-75% of the time, if we’re playing with strangers, it’s a casual game. But one of my biggest complaints about Magic in general is that some players do not understand the meaning of the word casual. For example, yesterday we played with a local at our LGS with our very casual decks. A nearby judge (Magic judge during tournaments) asked to join after a game. We asked if he had a casual deck–after all, he’s a judge and more likely to have less-casual cards–and he assured us it was casual. I pulled out an EDH deck that I’m currently testing, meaning it isn’t done and will have holes/flaws. VERY casual. He was fine with that.

He proceeded to play with a deck made up almost solely of cards that are 20+ years old and worth $100-$500 a card. Autographed. And with modified art. (So here’s the thing about modified art–it makes the card lose its value. That means this guy had enough $$$ laying around to deface cards worth several hundred dollars a pop.) Not only were his cards expensive, but they were really good. Powerful.  Absolutely. NOT. Casual. They were tournament level, and he killed all three of us very, very quickly. Let’s put it this way, most people play 1 mana per turn if they are incredibly lucky. He had SIX mana by turn two.

That’s typical in a very competitive, tournament level deck and a completely DICK move in a casual game. The only reason to do that to players in a casual format in a casual game is to get off on the power-trip of curb stomping people. It’s not polite and honestly, makes judges look bad because he should’ve known better.

And that brings us to the dragon deck of mine. It’s not casual. Not a bit. And I made it as a response to assholes like this judge because many times, it can hold its own (though I’ll admit, it wouldn’t have stood a chance against this judge’s deck, which was probably worth more than my husband’s salary). We once played against a douchebag who didn’t know the meaning of casual, and in response, I crushed him with my dragon deck. I pretty much only play it against assholes and people who want to play a non-casual game of Commander.

I bring this up because I love the format, but I’m really sick of the number of assholes in Magic. If it’s not the bro-gamers who are convinced that I don’t know how to play because I’m a woman, it’s these assholes who don’t know what the word casual means. The latter is why my husband quit playing Magic back in the day. The reason Wizards created this format was to get away from the competition and give players a casual and fun format to play in. Too bad some players don’t know how to be good sports.

If you can avoid the douchebags, Commander is a great, solid format and a ton of fun to design/play decks with. Wizards releases pre-made Commander decks as well so if you’re new to the format and want to try it out, that’s a way you can test the format without having to take the time and the money to create a deck.

Overall Rating/Impression: My favorite Magic format. In some ways, better than drafting, though watch out for the assholes. 9/10

(Kaalia of the Vast Magic Card is copyright Wizards of the Coast and used under the CCC for review/critique purposes only.)