The Science of Nostalgia

I’ve decided that in honor of all the Throwback Thursday things people have been doing online, I’m going to begin a Flashback Friday post where I review a novel I read back when I was a child. Sort of a mix of book review and a throwback. 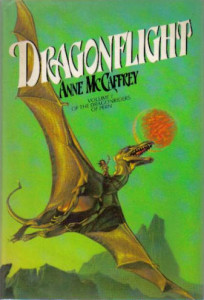 by Anne McCaffrey. I discovered this book through my friend, Melissa, whose bookshelves overflowed with a wide variety of science fiction and fantasy. I was still bored in the land of classic Nancy Drew and other generic YA novels…and I say “bored” because that is what I was. Bored. The books didn’t challenge me. They didn’t lead me to question the world around me or ponder the meaning of life (42!).

is the most thought-provoking novel–it’s definitely a novel of its time–but for me, it opened a doorway into a broader world. Published in 1968 by Ballantine Books, it was part of a set of novellas that led to Anne McCaffrey being the first woman to win a Hugo. It is the first of 24 Pern novels, and the first one I read.

While fairly juvenile in its character development (not to mention chauvinistic in places), it was my first real venture into fantasy. Reading this was so fun, I spent the summer of my 6th grade year writing a 400 page novel that honestly, was fan-fiction. My younger self thought I was being revolutionary in writing new adventures involving telepathic, teleporting dragons, but it was fan-fiction for sure. (Those who’ve read Pern novels will get this: In my first novel, instead of Ruatha Hold (from Pern), I had the city of Routh. Fan-fiction. Yep.)

Despite my rough venture into writing, the joy of writing such a novel is what spurred me into a career as a writer. I continued writing pseudo-Pern until high school, when an awesome computer science teacher noticed my gift for words. When Linda Donahue wasn’t teaching, she was writing SF/F. In joining her critique group and attending a few conferences, I didn’t just learn how to write, but I learned to find my own voice. (She’s an amazing writer, by the way!)

I also learned the unfortunate lesson about who to trust when I teamed up with an adult named Scott to co-write a novel. He took the novel and ran once we were finished. I didn’t let this set-back stop me. The writing continued.

Twenty-four years later, I am still writing. Still learning. And still remembering the novel that began it all.