I like to mention as often as possible that my husband wins. 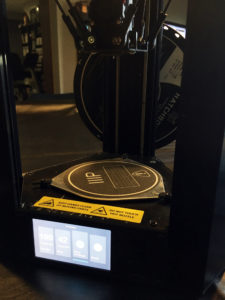 No, really. For our anniversary, he got me a 3D printer. This one to be exact. It’s an MP Mini Delta, which is a great intro-line model printer that still prints with decent quality and size for its price.

I could have my own action figure of my characters! O_O

There is a bit of a learning curve with this new hobby, but luckily I’m married to someone who knows a thing or two about the topic and is willing to help me learn. There’s also a flood of Maker groups, sites, etc. to help as we go through the process.

Since we were snowed/iced into our house part of last week (though it melted by Saturday afternoon), we decided to use the time printing a bunch of test prints, as seen below. (You can click the images to see them larger.) Our printer will print things a bit larger than a tall coffee mug, but we wanted to stick with smaller objects to test things out since the smaller objects print faster. These images are also of the objects unsanded and unpainted. That’s something I plan to do this coming weekend. 😉

This is Neko, who is a finger puppet because we printed him hollow. He’s about 3″ tall. 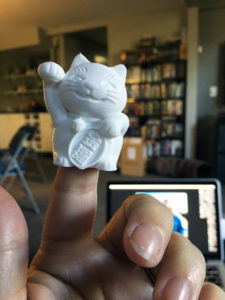 This is Neko next to a small TARDIS from Doctor Who. 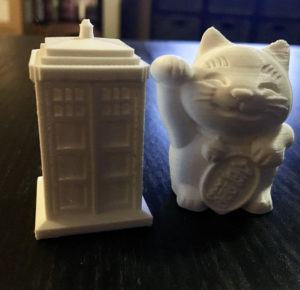 Next we decided to try out a proper miniature. The goblin lacks a little in detail as our printer isn’t made for that level of small detail, but he didn’t come out half bad! 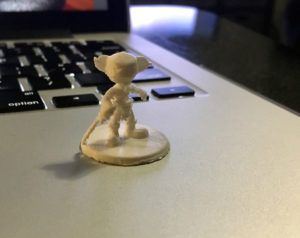 Here he is next to the other objects for comparison. 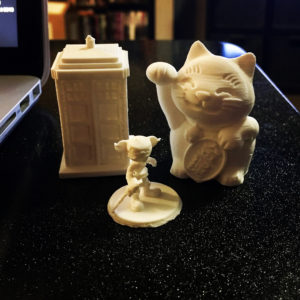 These are really adorable Dalek-Buddhas. 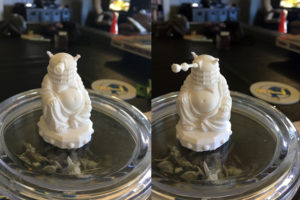 This is a barrel and two wagon wheels–objects that will be props for our Pathfinder campaign at some point. 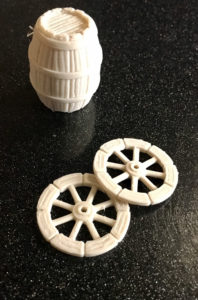 Here’s a nice group shot of some objects.

One of the things we’re also going to do is to set up a web cam so that you can watch the 3D printing as it happens (if that’s something that interests you). There’s something mesmerizing about the process! And on that note, back to writing…and maybe some 3D printing!